Sheldon were based, originally, at 4258 North Knox Avenue, Chicago, USA, and made a range of machine tools including millers, shapers and lathes using their own as well as "Sebastian" branding. From the 1940s until the late 1970s the Sheldon name was used exclusively on the Company's smaller lathes which, during the 1950s, was consolidated into the following types:

The letters "E" or "U" before the Series letter indicated the type of drive system fitted (see below), whilst numerals after a Series letter showed the bed length. The letters "P" or "B" after the bed length told whether the lathe was mounted on a simple but heavy cast-iron pedestal stand, or a full cabinet with integral chip tray and Q indicated the fitment of a "quick-change" (i.e. Norton-type) screwcutting and feeds gearbox in place of changewheels.
From the early 1950s the entire range of Sheldon lathes was available with not only ordinary types of bench-mounted countershaft (jack-shafts) systems but also on a cabinet stand with three distinctly different types of drive mounted within the base
Type "E" had eight hand-switched speeds from a conventional V-belt drive countershaft
Type "U", also with eight speeds, but with instant changes made by two external levers mounted on the cabinet stand's front face that operated a complex, multi-belt drive unit
Type "W" with a push-button control - this had the luxury of not only a spindle-speed revolution counter on the headstock but also an electric motor, with chain drive, to move the expanding and contacting pulleys of the variable-speed drive. However, one rather odd variant, the Series-M "Walking Stick" (almost certainly a short-lived, early production example) had manual control of the speed change by a T-shaped handle connected to a long rod that caused a jockey pulley to impinge against a pair of V-belts, the resulting motions being able to open and close the variable-speed belt pulleys.
Most under-driven lathes had eight speeds of  50, 90, 120, 215, 290, 510, 690 and 1200 rpm. but others were provided with a slightly different range which could also be ordered as a "two-speed" model giving a total of 16 spindle speeds ranging through: 50, 70, 90, 120, 130, 175, 225, 270, 300, 365, 460, 635, 680, 930, 1185 and  1600 r.p.m. As an example, the lathe Model EM56P was a Series M of 131/8" swing with a 56" long bed fitted with the "E" Type drive system and mounted on a pedestal stand..." - from http://www.lathes.co.uk/sheldon/

another site with good info: http://vintagemachinery.org/mfgindex/detail.aspx?id=2133 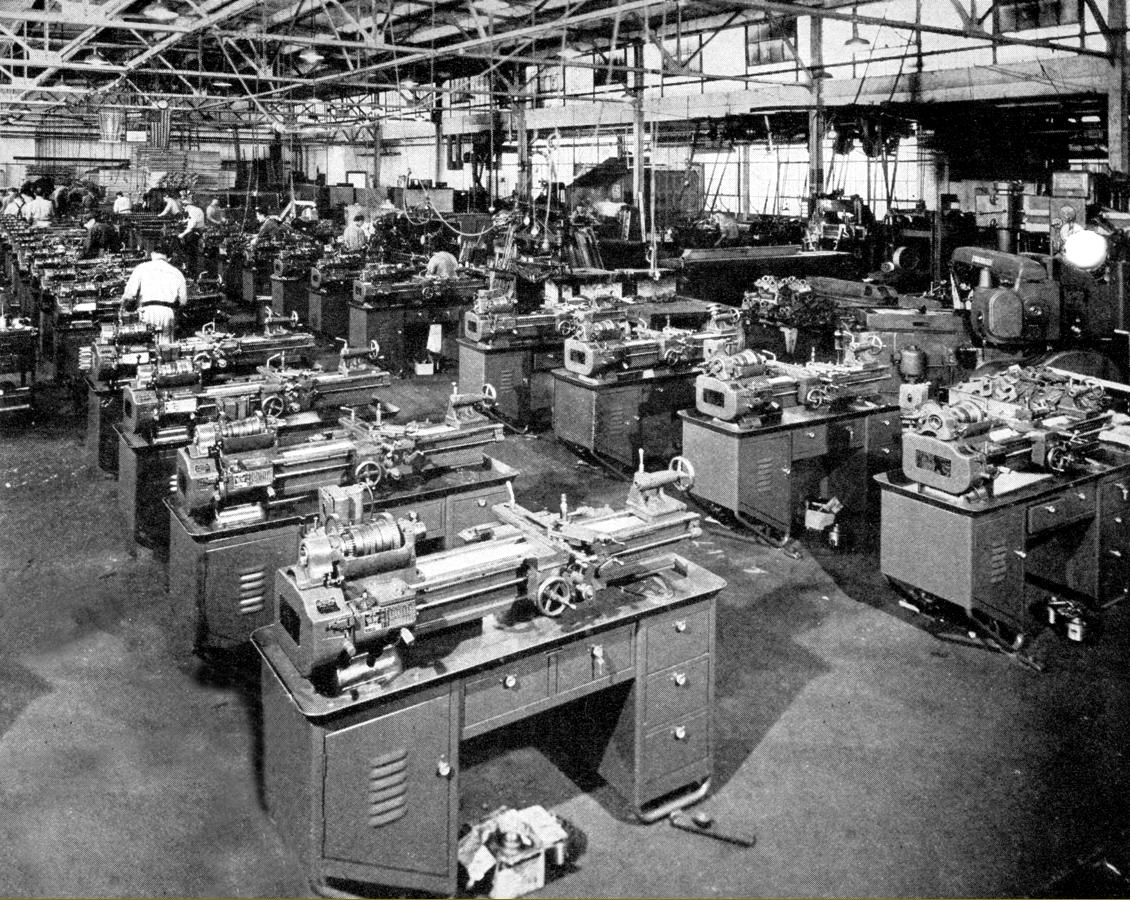